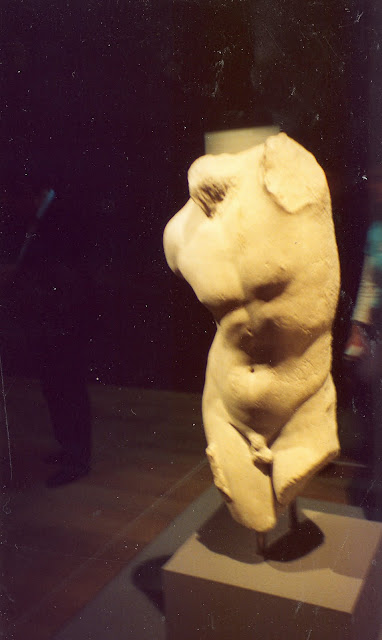 Du muesst dein Leben aendern.  That line hits every reader hard between the eyes.  I have been, and continue to be, no exception.  (The rest of the sonnet also inspires awe.)  I've been working on my own poem, in response to seeing the statue itself in 2007, but also in response to my long-standing complicated relationship with Rilke.  Even back in college, I was infuriated and transported:  yes, he certainly was that good; and, jeez didn't he just know how good he was.

Recently, though, I've been considering how that line is invariably translated:
You must change your life.
I mean, that was how I had always understood it.  And change your life would mean, does mean, what it sounds like:  leave the life you are in and make yourself a new one.  Sort of the aesthetic-spiritual version of the beginning of the mid-life phase.

It occurred to me, though, that there is another German word that is frequently translated as "change", namely, wechseln.  So, why wouldn't Rilke have used that word instead? particularly as it covers a champs lexique more in the direction of "switch" or "replace", namely, the usual interpretation?  It seems to me that aendern points more towards "alter", "amend", "modify", that is, to transform your life, whether by adding what is missing or by clearing away the impediments.

This matters only if you take poetry personal, as a possible source of words to live by, and I do, I have done, I still do.  And, there is a big difference between the prospect of getting yourself an entirely new life, and the notion of modifying the life you have been able to contrive so far.  And I'm still working on the dratted poem.

The above photo, btw, is a very stolen shot of the archaic torso of Apollo, from an exhibition of Praxiteles's sculptures at the Louvre. I am convinced that this sculpture is the one that inspired Rilke.
Posted by Karen G-M at 4:34 PM