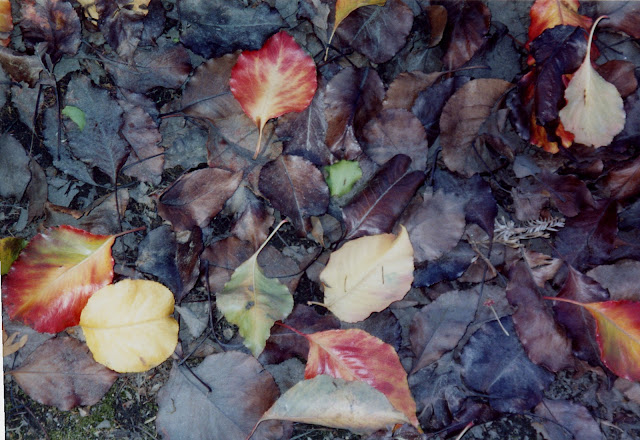 Yes, what it says. And since this was the reason I set up a blog int he first place, I'll start making a post for each new work I get published. This will not make finding my pieces easier, but it will do until I set up a proper website. Ah well.

In that spirit, I note that Mobius: The Journal of Social Change (mobiusmagazine.com) will take you to She Discovers that Her Republican Grandfather was a Secret Nazi Hunter, of which some was imagined but none was invented. 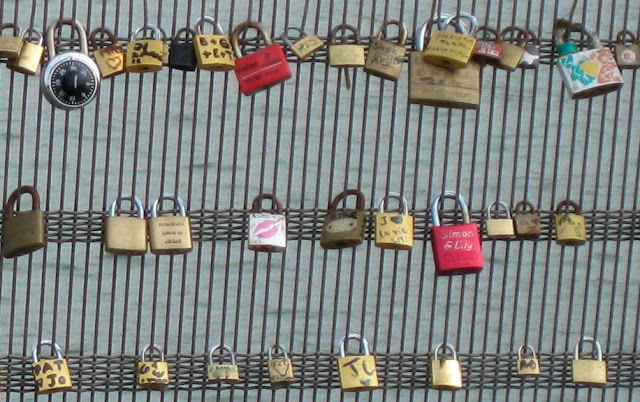 The first photo shows Walter breaking bread for breakfast in the flat we rented in Paris. Breakfast is baguette tradition, some chevre, Normandy butter, and a tangerine. Cafe au lait to come, in the nice little footed bowl. The second photo shows the locks of love mounted on the Pont des Arts, before everyone from all over the world started leaving locks, locks upon locks linked to locks, and the whole thing became too heavy and started peeling away from the bridge itself. Now the bridge is faced with thick pale green glass? or some kind of plastic? not unattractive, but nothing like the panoply of locks. Ours is the tiny black one at the upper left.

I have been working on a collection of my poems about Walter, sending it out to publishers. This week, The Beautiful Leaves was accepted by Bamboo Dart Press. They hope to have it printed by August 2023. The poems encompass Walter's aging and my grief about losing him. The poems themselves date from 2012 to 2022. I know that there is nothing new about loving someone who then dies, but I do believe that I have something unusual to say about that experience, namely, looking at the pain and the beauty directly of losing someone you have loved deeply and who loved you that way as well. I wrote these pieces partly to be honest about the horror and pity, but also to honor him as he deserved.

I had expected that getting the manuscript accepted would leave me joyous. This is not so. I have felt confused and weirdly relieved. I believe that, as glad as I always am when my work is appreciated by someone else, wrapping up this particular project means also wrapping up a chapter in my life. Ready or not, there it goes.

Not to Complain, but Complaining 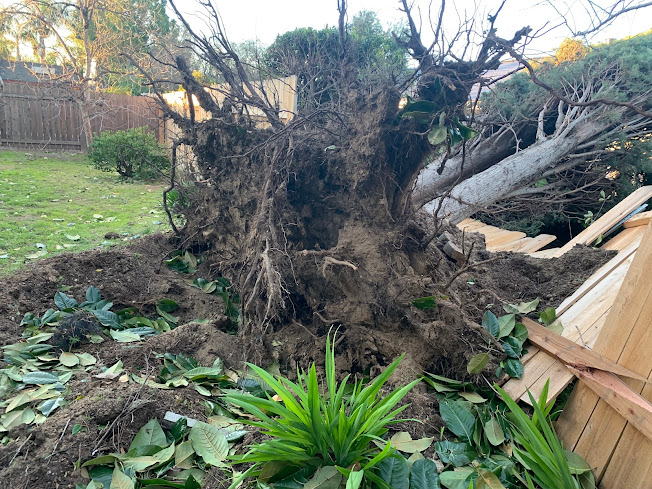 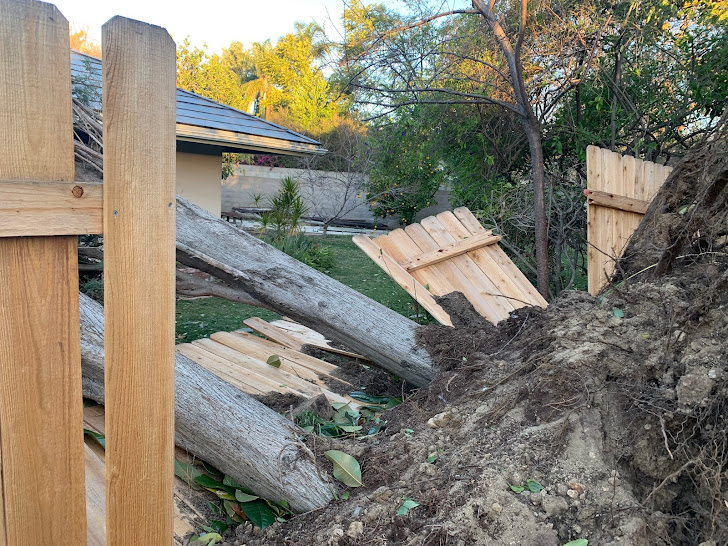 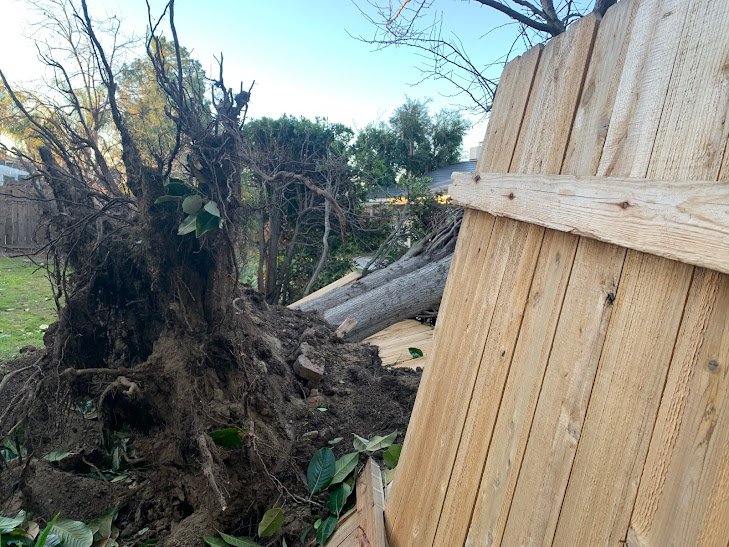 Behold, an act of God. Last night we had hard winds, gusts up to 80 mph. For comparison, a Category 1 hurricane achieves speeds between 74 and 95 mph. I am not the only one in my community to have trees or parts of trees blowing over. This Italian cypress, unfortunately, came right up out of the ground and landed mostly in my neighbors' yard and on their roof.

As it happens, these are the neighbors whose Tesla solar roof sends excruciatingly bright glare into my house ten months out of the year, running all along my west-facing wall. I've managed to mitigate said glare by installing ceramic film on all the windows and sliding glass doors. They had seemed amenable to paying some part of it, then apparently decided that I was harassing them and ordered me never to contact them again. Well, goodness. These are the folks whose kids hugged me when they saw me, and to whom I sent fresh-baked goodies. I had hoped we might remain civil but had to give up on that.

Well. Now, the tree lies on their roof, a pine of Rome. I suspect they are not home, as I have heard nothing from them, which suis me fine. Friends and my insurance company tell me that each person is responsible only for their own damage, a relief to me. I will incur $2000 for the deductible, thanks to the pipes that broke two years ago and flooded/destroyed half the house.

Now I wait to be contacted by my insurance company's designated contractor. Apparently, there are 25 people ahead of me, so far. I had called an arborist I'd used in the past, but 1) he won't be available for two weeks, and 2) his truck now bears the message, "Democrats Are Destroying America." I'd rather not support him anymore.

This debacle follows bills of $2000 to the veterinarian for my cat, who attacked a possum and lost, of $4800 for corroded pipes, which repair included digging up half the front lawn, and, a bill for $8000 for bringing the electrical system up to code (and installing a new main switch, as the old one had frozen).

I'm feeling beaten up by these acts of God. I had been in the middle of a major re-write qua reorganization of my manuscript of poems about my late husband, and I was making progress, though not without struggle. Looks like time to take a break for something hard in the outer world. 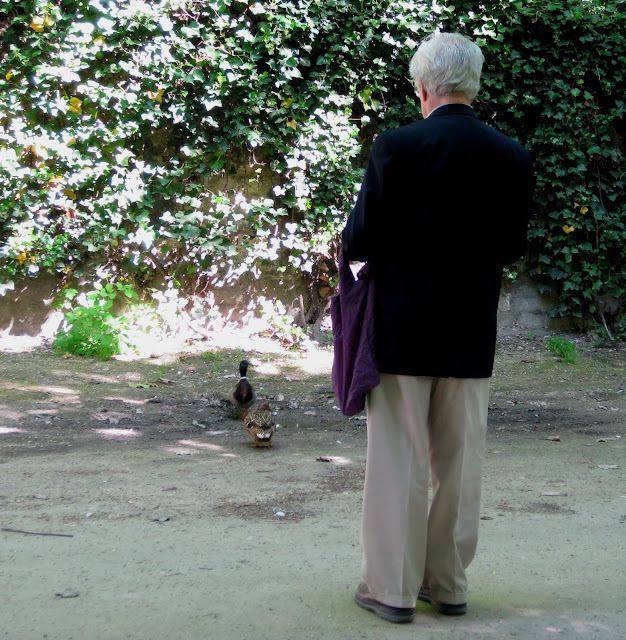 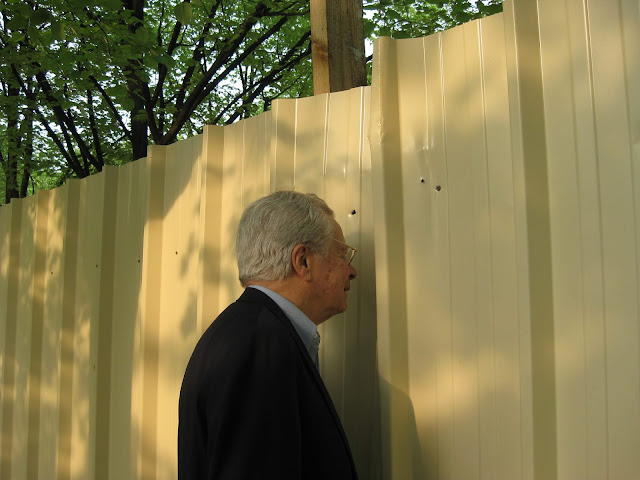 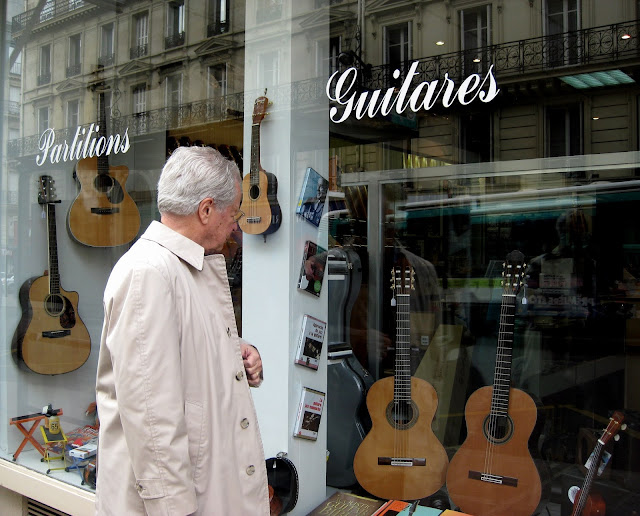 Walter's yahrzeit is coming up. December 16 2021 will be the third anniversary of his death. I remain weirdly disoriented by his not being here. Sometimes I feel as though he had never been here in my life, sometimes I feel that he died last week. Every time I deal with something but remain dissatisfied with the outcome, I feel that he would have handled it better. At the least, he would have been able to reconcile me to the imperfect situation.
The house is still full of stuff from our life together, even though I have divested myself of things that have nothing to do with my life alone. The practice cello, for instance. He hadn't played it in our 35 years together. Neither had his daughters. I offered it to them but they didn't want it, Turns out it was a good cello to begin with, a good tone, but it would need a lot of repair to be in good condition again. The bow was actually worth more than the cello. They're both gone now, as is the old-school metronome I gave him (wooden, spring-driven). I never found it helpful to play or sing with a metronome, and I'm unlikely to start now. It gave him joy to see them all in the house, though, even after he stopped being able to use them.

Walter did a lot of looking, and a lot of seeing. He noticed, he saw, he thought about what he saw, he made connections. I have long thought that curiosity is an under-appreciated trait, and Walter was certainly curious about the world around him, the people around him, the possibilities around him. You can see that, in his seeing, he was experiencing--something.

Everything new is old again 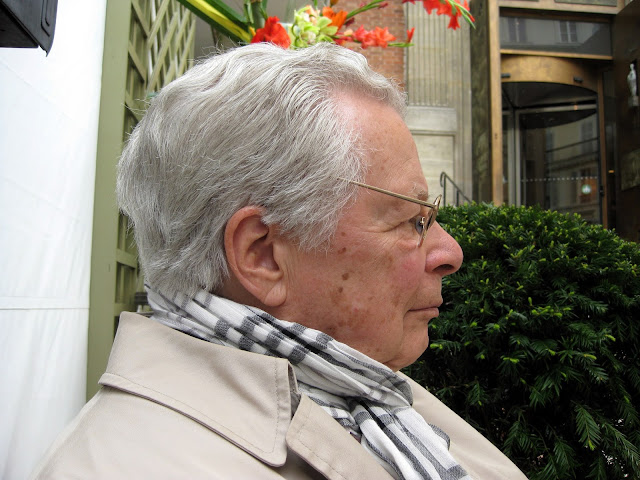 We're getting into the time of year when my dear husband, Walter Maya, declined and died. This photo speaks for itself, including the little flourish of flowers apparently growing out of Walter's head:  his playfulness, his imagination, his ability to take what was in front of him and make something good out of it.

And this pertains to writing how? I am in the thick of making a collection of poems about him, mostly directly, and incidentally about mortality and decline. There's a lot of that going around. My memories and preoccupations have always been influenced by the time of year. I wonder if it is the slant of the light and the length of days, but who knows--not me. Anyhow, I am writing new poems about him and adding them to the older poems. I've always written about death and decline, even mortifyingly early on. In the years since his diagnosis with cancer, I wrote very few poems that were not about loss and change, his changes, losing him.

As a psychologist, I performed neuropsychological evaluations. Which is to say that I used my experience and the available tools to answer questions about changes and difficulties in other people. You might say that I was peculiarly trained, suited even, to notice his changes, his losses, and therefore my losses too.

So, since the last time I posted in this blog, I've been steeped in thoughts and feelings about who Walter was and about the hole his death has left in my life. I do believe I'm making progress in this project, this book-to-be. I don't know if the smaller or larger worlds care about such a thing, but it's what I need to be doing. 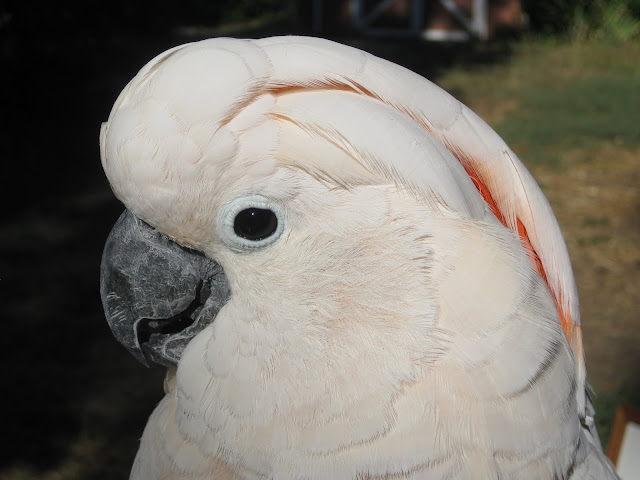 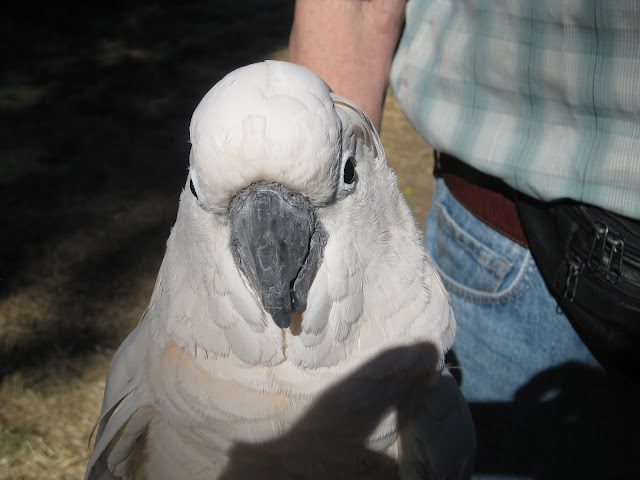 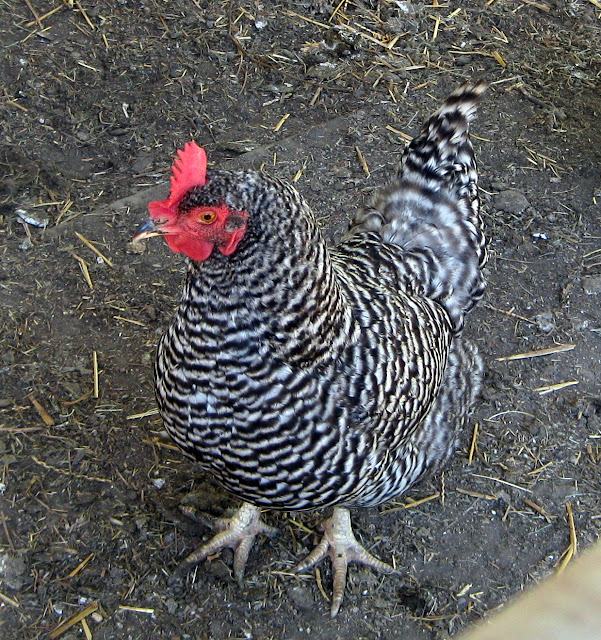 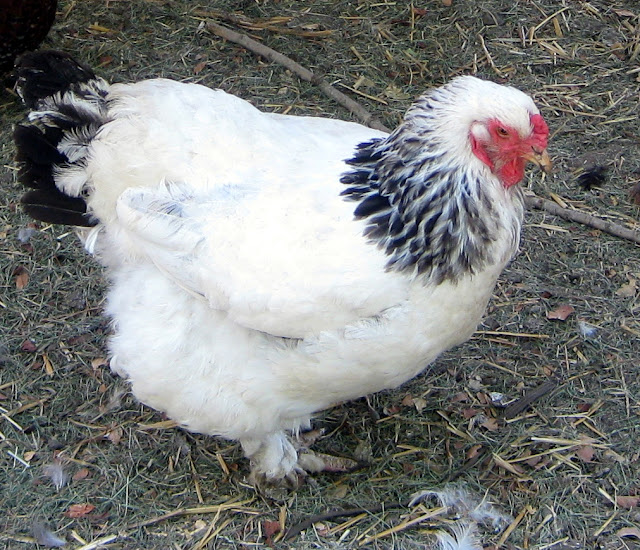 Behold some residents of the 2015 writers' conference at Napa Valley Community College. That was when I last attended, with my sweet husband before his diagnosis of lung cancer. We both had a good time; he always got on well with writers and hit it off particularly well with Brenda Hillman, whose mother was born in Brazil.

I'm looking forward immensely to taking part in a workshop given by Robert Hass (yes, that Robert Hass) on translating poetry. So far, the languages of the source material proposed by other attendees include Tagalog, Korean, Russian, Spanish, and my own German. I want to come up with an English translation of Schumann's setting of sixteen of the poems of Heinrich Heine, Dichterliebe--A Poet's Love. I have loved this piece of music ever since I was introduced to it 50 years ago, and I've been fooling around with translating Heine ever since I first read him. What I'm trying to say is that this is indeed my idea of a good time.

So, this year will be the first time I'm attending a writers' conference solo. I've never before attended one of these conferences without my husband. I'd attend the workshop in the morning and we'd get lunch and I'd tell him all about it and then go write and we'd get dinner and I'd tell him how I wasn't sure if what I'd written was even a poem and he'd support and encourage me through all of this and even claim to have had a good time reading or walking or lying out somewhere and looking at the sky.  I still expect to have a good time talking with other writers and attending events, but--I'll miss my sweetheart too.

Bruce Wayne! He's the greatest orphan of them all! 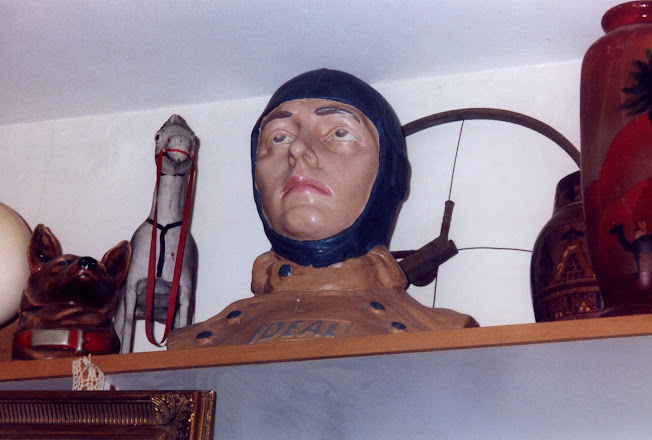 In a desperate effort to find the top of my desk, I came across the following dialog.
I wish I had written it, but I suspect I transcribed it from the LEGO Batman movie.

Joker:  Look, I’m fine with you fighting other people, if you want to do that, but what we have? This is special. So when people ask you who’s your #1 bad guy, you say….?

Joker:  Are you seriously saying that there’s nothing—nothing!—special about our relationship?

Joker:   Don't you think it's finally time to face your greatest fear?

Joker:  Why did you build the Batmobile with only one seat?

Batman:  Because I only have one butt.

I wrote down also these deathless lines:

We're going to punch those guys so hard, words describing the impact will spontaneously materialize.